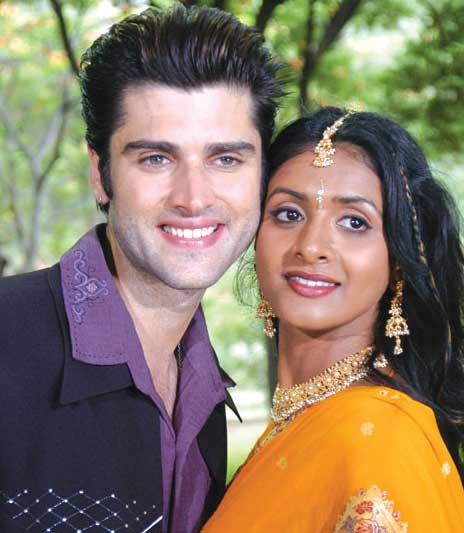 I was hired to adapt an East Indian script into a screenplay for a Hollywood-Bollywood crossover romantic comedy, INDIAN BEAUTY, that was later taken out of my hands by Dot Com Productions and Trinity International Entertainment.  The title, that was theirs to begin with, changed to ON THE OTHER SIDE.

Acting with John Mookey Suarez and my favorite children's party clown, Magical Marion Covit, in my political screwball comedy, The Assassination that Saved John's Pizzeria, at the Bank Street Theatre, in 1995.  I was never actually that heavy, it was just an illusion I created in order to authentically portray the proprietor of a pizza place.

Catherine Russell and Robert Zaleski, in my existential political drama, I'LL SEE YOU IN HELL, also presented at the Bank Street Theatre, in 1995.  Robert's one of those reliable actors who you could always count on to return your call a half hour after you make it, and to show up where you want him to be, a half hour after that.  And Cathy, of course, defines the term New York Institution.  In the fifteen years that she's been both starring in and general managing New York's longest running play, PERFECT CRIME, Cathy has only missed four of the show's more than fifty five hundred performances.  She truly has a busier schedule than anyone I've ever met, and I felt honored that this creative dynamo found the time, and the enthusiastic energy, to shine in my play.

I'm also guessing that they changed the title.  SUPERSTAR wasn't my idea, that's what the producer insisted that I call it.  I might have come up with something more original and creative, like A STAR IS BORN.  Since I don't have the actual film, I've substituted pictures of my good friends, Sunda Croonquist and Mike Butler, performing in a show that I wrote and produced, called PERCEPTIONS, DREAMS & MYSTIFYING THEMES.   If you want to know more about Mike and Sunda, dig around this website and they'll turn up.

My first one act  to be publicly performed started as a project for an NYU video class.   One of the cameramen actually owned a rather nice little theatre in Mount Vernon, New York, and he immediately offered us a small bit of money  to put the play on, there.  The piece was called THE HOOKER CHOPPER, it was my first and only theatrical thriller, and that's me, acting with Pam Ervin.  Where are you now, darling, it's been years?  I'm talking, of course about all that beautiful hair that I once had; Pam, if you're out there, I'd love to hear from you, too.  The glasses were a prop, though I think I need them after doing this website.

Pseudo Audio   Press    What's it About?