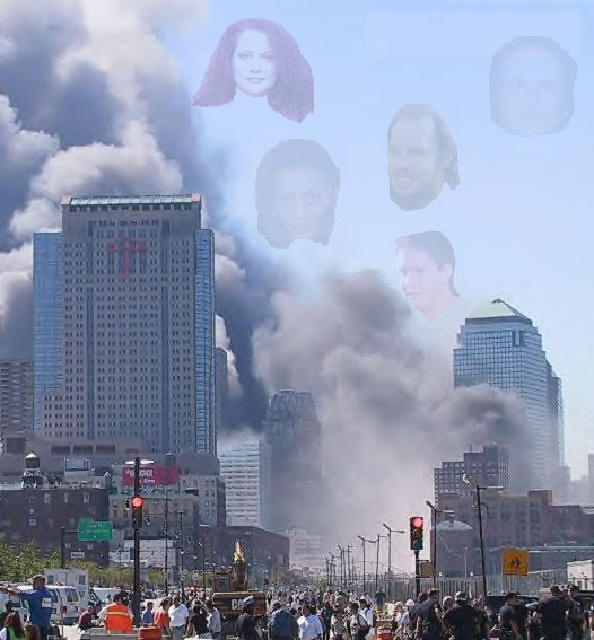 EMPTY SKYLINE is the title of the CD of September 11 related music that I wrote some of the songs for, and that I'm currently co-producing as part of a multi-media release, with the non-profit organization, Art for Healing.  Singers, composers and musicians who have contributed to the project include Grace Clarke, Carolynn Black, Mike Boldt and James Raddock. 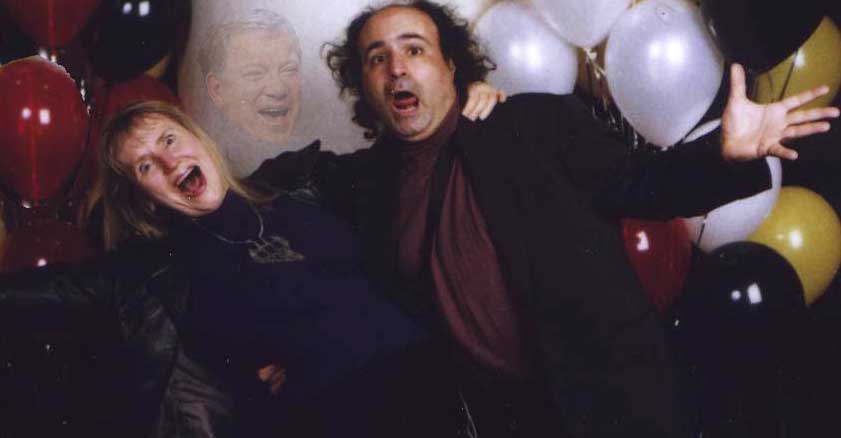 The intro and log line for my new urban thriller for the screen, JULIAN'S QUEST, go something like this: The Bone Collector goes to a Star Trek Convention:   Taunts from a blind date trigger memories of childhood torment that lead an internet stalker and celebrity worshipper on a killing spree that ultimately brings him face to face with his lifelong obsession.  An Oscar winning veteran actor is interested in a key supporting role, and hopefully, the next time you check in, some more key pieces will be in place.  For lack of a more appropriate picture, I included this one, of Sophia Ziburtovicz and me, with an added insert, of course. 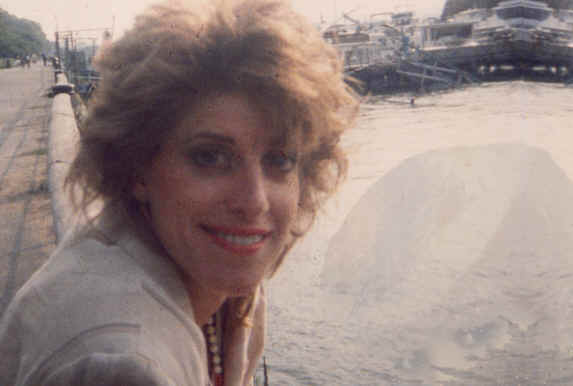 I'm truly thrilled to be able to put my reincarnation romantic fantasy, THE ONLY TRACE, back at the top of my list of active projects.

When I first wrote this full length screenplay, in the mid eighties, everyone seemed to love it,  including people like Kevin Kline and Marty Scorsese, and especially Elizabeth Dellas, the woman in the photo, and me.  A soundtrack was recorded, a few scenes were shot cheaply on video, and the script was optioned by an independent producer who truly had good intentions, but never really got it all together.  I guess I lost my momentum as a businessman and promoter, and moved on to the next creative project before this one really took off.  However, another  independent producer who loved the script, years ago, recently told me that she wants to try and make it happen.  The screenplay was touched up, several new songs were recorded for the soundtrack, my little production company became involved, and the wheels are now in motion.  Several actors and directors are starting to show interest, and I should have more to report, the next time we touch base.

The tale of the above picture would take another three websites to convey, but if you're interested enough to ask, we'll sit down in Central Park one day, and I'll tell you a story that will have you believing things that  you never believed before.

My first submission out of college, THE OEDIPUS COMPLEX, was optioned by Mr. Joseph Papp, and slated to be part of an evening of ten minute musicals, that were to be directed by the late, great Tony Award winner, Wilford Leach, and choreographed by Broadway living legend, Graciella Danielle.   The project went on what turned out to be permanent hold, and my mini rock opera that tells the story of the Greek king and the family that he loved, was never actually performed in public.  However, several pop and theatrical recordings of the piece exist, I recently did a storyboard animation of the whole thing, I adapted a classic rock mini-opera into a second short musical, I picked up several other ten minute musicals from noted composers, and with any luck, you will see this piece on a New York stage, sometime in the near future.

To watch the Scripted Storyboard Theatrical Version of THE OEDIPUS COMPLEX, or the Original Rock Mini-Opera, click on the respective orange links.

HOUSING is a stage play that was intended to literally change the face of the city of New York, and in a small sense, it almost succeeded.  Because of the research I did and the social statements the play tried to make, I was written up on the front page of the Metro section of THE NEW YORK TIMES, I was asked to speak for groups of housing activists, policies at New York City's Department of Housing Preservation and Development (HPD) were reevaluated, and a law was actually placed on the city's books.

Beyond tracking down some obscure videos, watching a lot of tedious television, reading some books and newspapers, and downloading volumes of pure unabridged trash from the internet, there wasn't a lot of other research that I could do, to write Starr's on Broadway.  For HOUSING, on the other hand, I got to know squatters, homeless people and Tompkins Square Park tent dwellers, I went to housing demonstrations, I got friendly with lawyers on every side of the issues, I spent hundreds of hours looking for a Manhattan apartment, and I even spent a year on a job that gave me access to the private files at HPD.

Though HOUSING was presented in a series of well received professional staged readings, that are discussed further on the Previously Produced Works page of this website, the large cast and numerous sets made theatre producers skeptical.  However, it's currently being promoted as a prospective film, and a number of prominent people are showing serious interest.

The best thing that happened as a result of the play, of course, was the meeting and subsequent wedding of my good friends, Sunda Croonquist and Mark Zafrin.  Can you find them, on the above wall? 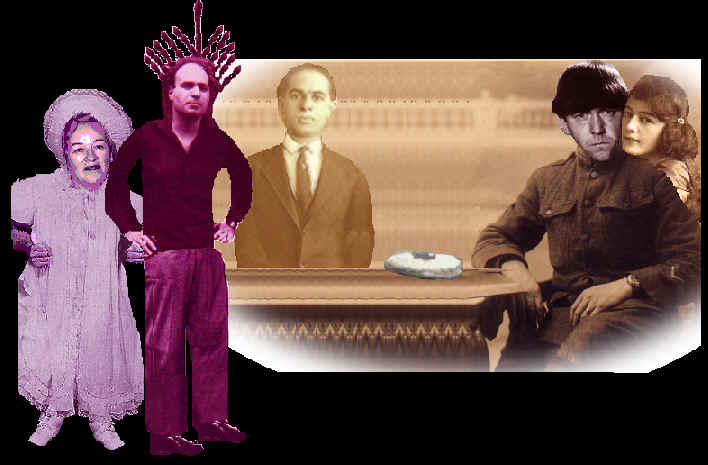 At his lunatic grandmother's death bed, a self proclaimed yuppy punk is stunned to learn that Gramma's tall tales of her wilder times weren't quite so tall, and that he is not the descendent of the billionaire aristocrat that he always believed was his real grandfather, but is in fact the result of a fling that his grandmother had, in her groupie days, with the leader of a world renowned comedy trio.  That's the basic premise to GRAMPA NEVER THREW NO PIES,  my single venture into genuine slapstick.  This half hour, rather outrageous teleplay was inspired by the fact that my maternal grandmother (both women pictured above) grew up with Moe and Shemp Howard, and performed in small acting groups with them, in Bensonhurst, Brooklyn, as a teenager.  I'm not clear on exactly what it is they performed, but somehow, I happened to have been born into an otherwise staid and unassuming Jewish family.  This script was written on a whim, and left on the computer for a long time, but with the recent Three Stooges craze, a major cable network has shown an interest in producing it.  Again, by the next time I update this website, the project should be much further along.

The down side to being a lyricist who doesn't play an instrument or sing is that you always have to rely on others to put music to and perform your songs.  The good part is, you get to work with a wide variety of incredibly talented people, like those pictured above.

Amy Coleman is one of the best known singers, and is arguably the most amazing performer on the New York rhythm and blues scene, today.  She's recorded several CD'S, has starred in numerous off Broadway shows and national tours, and regularly performs, with her own band, Flamin' Amy, at famous New York spots, like Chicago Blues.  Mike Butler is in the process of recording his second CD, he's performed at numerous clubs in different parts of the world, and he can be found, every weekend, entertaining scores of Broadway professionals, regular patrons, and passing tourists and sailors, at O'Flaherty's Inn, on Restaurant Row.   Angora not only has a truly exquisite singing voice, but she's also gifted with one of the most creative and original minds that I've ever come across; she's sung and written every kind of music from opera to R & B to rap.  Magnet is a very talented composer, who has played the keyboards and sung with more than a few bands.  Clare Cooper is a brilliant singer, songwriter and entertainer who recently released her first CD, and can be seen, every weekend, playing piano, singing and entertaining the crowds at Rose's Turn, in New York's West Village.  Linda Edlund plays every instrument and sings on most of her original recordings; she's written numerous songs with me, and at least a hundred, on her own.  Mad man Hymie Eingelfat was America's first Hassidic rapper, whose extensive resume is too diverse and bizarre to get into.  Jumpin' Alex is a new wave singer, songwriter and musician, who just released a new CD, and whose unique style and outlandish costumes have helped make him a known fixture on the stages of New York's hottest nightclubs, as well as on the international circuit.  Singer, model and MTV executive Grace Clarke could hold her own with any of the great divas of now or any other time, and is probably one of the most uplifting and beautiful people I've ever worked with.   Mike Boldt has collaborated with me on a half dozen songs; besides playing every instrument on his many original recordings, Mike's done the design and photography work for numerous published books, he's written and performed the soundtracks for several feature films, and he recently scored the music  for the video release of a restored D.W. Griffith silent classic.  Marleah Martin has a singing voice that would make the angels stop and listen; she's recently out of college, new to New York, and destined to be make a significant mark in the world of musical theatre; remember where you heard that.  Gregory Rahming is an accomplished international opera and gospel singer, who's headlined in all the big rooms, like Carnegie Hall, and who was prominently featured in the recent Broadway revival of ON THE TOWN.  And Mike Messer always seems to be working on eight different things; in the few years that we've been in close contact, he's starred in at least twenty off Broadway and regional musicals and plays, he played the leading role of Berger in the thirtieth anniversary international tour of HAIR, and he was one of the principle performers in the recent star studded British Rock Symphony Concert.

Pseudo Audio    Press   What's it About?