FREEDOM ON THE EDGE was my working title for an autobiography that I was commissioned to ghostwrite, ages ago, for a slightly eccentric, but endearing businessman (pictured here, with his girlfriend of the time; their faces, of course, are covered by the face of a renowned friendly ghost; isn't it amazing what you can pick up, on the internet?).   Body shape and absence of extended ears would seem to indicate that this is not Steve Forbes or Ross Perot, but other than that, I can't tell you much else; ghostwriting means sworn secrecy.

At the time of my friend Tiny Tim's death, I was just starting to put together a video and CD set, tentatively titled THE LEGEND OF TINY TIM.   Demos of three new songs were recorded, but unfortunately, we never got to put his voice on them, or to produce what I was sure would have been hilarious and unique music videos.  I do have some rather interesting performance and behind the scenes exclusive footage, though, including backstage at Tiny's second TONIGHT SHOW wedding, where I gave away the bride, the beautiful auburn haired Miss Jan, pictured above.  Tiny was truly one of the most unique and multi-faceted entities that I've ever encountered, and when I sit down and write his story, biopics about people like Larry Flynt, Andy Kaufman and Howard Stern will seem like films about Knute Rockne.

On the surface, the description of HEIL ROACH makes the short story and adapted thirty minute teleplay sound totally ludicrous.  However, speaking as objectively as I can, I'd have to say that it is one of the funniest, most moving, most original  and most imaginative pieces that I've ever written.  Essentially, this is the tale of Shloimie Fiskowitz, a Hassidic concentration camp survivor who declares a one man war on domestic cockroaches, because he is convinced that each individual bug is a specific reincarnated Nazi.  Everyone's either loved this story, looked at me like I was totally out of my mind, or both, but I don't think too many people have read it and forgotten it.  HEIL ROACH hasn't found it's stage yet, but I'm confident that there is a place for it, in the literary world, and in the world of socially significant television. 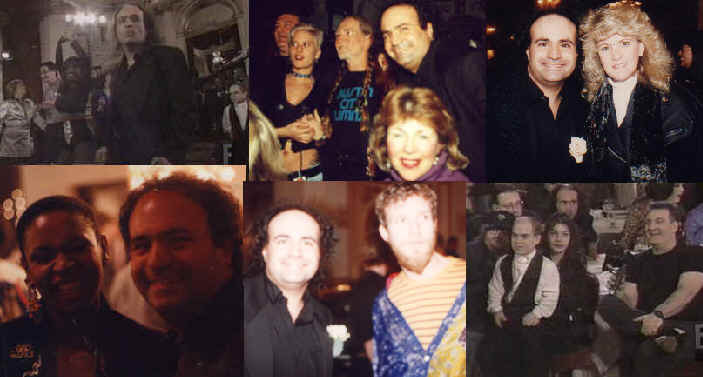 Before one of us got too high on the prestige scale to associate with the other, Howard Stern used to let me come on his program, once in a while, and talk about some of my less note worthy ventures.  These pictures are from a few of his nationally televised fiestas.  You might recognize two or three of the other people, scattered around.