Again, the rest of the biographies below were written sometime around 1999, or shortly afterwards. 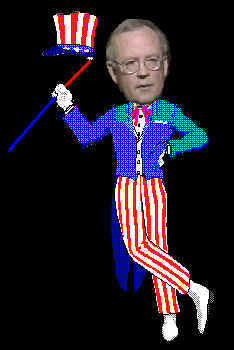 ROGER ALAN GINDI, is the head of  GINDI THEATRICAL MANAGEMENT and the PRODUCER'S MANAGEMENT GROUP.  Other Broadway General Manager credits includeMA RAINEY'S BLACK BOTTIOM, THE GATHERING and KING HEDLEY II.  He previously managed JITNEY, the winner of the New York Drama Critic's Circle Award for best play of 2000.  He produced SHAKESPEARE'S R & J, the hit four-man adaptation of Romeo and Juliet, that ran off Broadway for over a year, and toured nationally.  He managed the original production of Dan Goggin's smash hit musical NUNSENSE, as well as Nunsense 2: The Sequel,  Sister Amnesia's Nunsense and Jamboree.   He also managed the hip hop musical Jam on the Groove, on an international tour, as well as Dan Butler's one-man play, The Only Thing Worse You Could Have Told Me, and Martin Charnin's revue, Loose Lips.  On Broadway, Roger produced Abraham Tetenbaum's Crazy He Calls Me, and was the Associate Producer/General Manager of Alan Ayckbourn's A Small Family Business.  Also on Broadway, he was General Manager of the Broadway Alliance productions of Our Country's Good and Mixed Emotions. Other noteworthy productions managed by Roger include David Mamet's controversial hit play, Oleanna, Larry Kramer's The Destiny of Me, Joe Pintauro's Raft of the Medusa, and the musical A Change in the Heir.  If you'd like to contact Roger about Starr's on Broadway, you can here: E-Mail Roger.

SOPHIA ZIBURTOVICZ,  Since co Producer of Starr's on Broadway, dabbles in everything from science and nature to painting, singing and animation.   A computer programmer by trade, this is the second theatre project of this sort that Sophia's had a hand in producing.   Besides helping to put together the initial financing for this play, Sophia's done  everything from costumes and graphics to most of the technical work on this website.  You can contact her by clicking here:  E-Mail Sophia.

And then, of course, we have the actors who appeared in the play and the video production, and whose images and voices fill this website.

CARL KISSIN spent eleven years as a principal performer and several years as the head writer for New York's premier, multi-award winning improvisational comedy group, CHICAGO CITY LIMITS.  He’s played his own material on COMEDY CENTRAL, THE JOAN RIVERS SHOW, THE JACKIE MASON SHOW, GOOD DAY NEW YORK, KWIK WITZ, and THE TODAY SHOW.  Carl performed in Eric Bogosian's play, TALK RADIO, at the Public Theatre, and was in Oliver Stone's film version of that play.  He recently appeared Off-Broadway as Oronte in THE MISANTHROPE.  He was an original staff writer and actor for the MTV show MOUTH TO MOUTH, and for VH-1’s MR. EGGMAN.  Carl developed and directed sketches for the pilot episodes of NBC'S LIVE ON TAPE.  In the copywriting realm, he won a Monitor Award for his commercials for Jamesway Department Stores.  Carl is proud to have been invited to perform his Ed Koch impersonation at the 60th birthday party for former Mayor Dinkins.  His voice has also been heard on National Public Radio, on AS THE WORLD TURNS and on ABC’s Olympic coverage, dubbing foreign athletes.  To contribute to his insomnia, you can click here and E-Mail Carl.   You can also read more about him at the CHICAGO CITY LIMITS website:  www.ChicagoCityLimits.com.

TOM SHILLUE  grew up in the Boston area, where he attended Emerson College and University of Massachusetts before moving to New York.  He can be seen around town most weekends at clubs like Stand-Up New York, Gotham Comedy Club, Carolines on Broadway, The Comic Strip, and The New York Comedy Club.  His autobiographical monologues have long been a popular feature at “Moonwork’s Evening of Original Work”.
He has appeared on “Late Night with Conan O’Brien”,“Premium Blend” on Comedy Central, "NBC Late Friday", and has appeared in his own segment on “The Daily Show with Jon Stewart”.  He co-wrote and performed in the long-running Gas, Food, Talent at the West Bank, and co-wrote and appeared in The North American White Male with Jim Gaffigan and The Velvet Vise with Janeane Garofalo. He recently appeared in the New York opening of The Second City's Melancholy Baby, at the Ars Nova Theater.  He may be most recognized from his dozens of television commercials for companies such as Audi, IBM, Heineken, Snickers, Computer Associates, Frito-Lay, Staples, Southwest Airlines, and the Bud Light.   He wrote and co-starred in the award-winning short film "Go Jimmy, Go", and co-directed the film “Fourwarned: A Barbershop Odyssey”, which won a “best mockumentary” award at the MicroCineFest in Baltimore, although Shillue denies mocking anything, especially his long time love of barbershop quartetting.

NATALIE BLALOCK is a very talented and versatile actress and singer, who was last seen on Broadway in THE SCARLET PIMPERNEL, versions 1 and 2. Her many theatre roles include Miss Trixie Delight in Ford's Theatre's production of  PAPER MOON, and a fortune teller in HOUDINI, at Goodspeed.   She toured Europe for six months, singing the BEST OF BROADWAY in countries like Germany, Switzerland, Holland, Austria and Scandinavia.   A fixture on New York’s cabaret scene, Natalie performed her one woman show, DEAR JESSE at Rose’s Turn.  On television, she’s been a regular featured player on LATE NIGHT WITH CONAN O’BRIEN, where she often had the recurring role of Madonna.  You can contact Natalie, for business reasons, by clicking E-Mail Natalie.

CHRISTIE KLEIN has been performing professionally in theatre, film and television, both nationally and internationally, for the past ten years.  She recently completed a cruise contract that took her through the Orient, Southeast Asia and Down Under, as a lead vocalist and dancer.  Her film credits include Fox Animation's ANASTASIA, where she was the body double for Meg Ryan, who played the title character.  A recent import to New York, Christie was last seen in an evening of one acts at the Trilogy Theatre, and will be featured in a new independent film.  She thanks Eric for the opportunity to display her comedic talents in Starr's on Broadway.   Christie freelances with three agencies, commercially and theatrically, and is currently seeking representation as a signed talent.

MICHELLE PETERS has done extensive work in film, theater and television, as well as quite a bit of print modeling, a large number of TV commercials, and numerous radio voice overs.  She co-starred in the feature film, LAST EXIT TO EARTH.

CLICK HERE TO TAKE THE STARR'S ON BROADWAY HISTORY QUIZ!

What's it About?    Press  Starrdi's Wall