How You Can Become Involved With 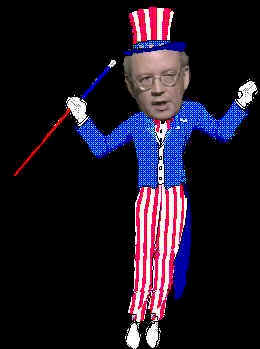 What we have is a sharp, often hilarious and socially significant play that deals with some of the most noteworthy, if absurd, political events in recent, and not so recent history.

We have a truly brilliant cast of seasoned comic actors and genuine chameleons.

We have a well known, celebrity director, raring to go!

We have a press rep who's publicized more Broadway productions than most of us will see, in a lifetime!

We have the largest and most renowned entertainment law firm on the east coast, ready to protect, defend, negotiate and draw up any and all contracts that we need.

We have a seasoned and well reputed Broadway General Manager, who's made the detailed budget and is ready to run the show!

What we need are experienced Associate Producers and Co-Producers!

We're looking for people who love and are very good at Fund Raising!

We're seeking investors who like what they see here, are yearning to be involved with a Broadway  production, understand the financial risks that come with any venture of this sort, and crave the excitement, glamour and many perks that go along with being a part of this fascinating world.

If you see yourself in any of these roles, if you have something else that you think you can contribute to the production of this play, or if you just have a question or comment, please  E-Mail Us.

(arguably the most enlightening multiple choice test on the internet!)

Pseudo Audio   Press    What's it About?